In 2015, in the middle of the refugee crisis, countries of the European Union (EU) reached an agreement to receive and resettle 160,000 refugees in two years. At the end of this period, in September 2017, less than 45,000 people had been allowed into one of the 28 EU member countries.

Since then, there have been fewer petitions for asylum. The number of people asking for international protection from the EU reduced to almost half the amount in 2017, in comparison to solicitations registered in previous years.

This decrease is partly due to most European countries failing to fulfill the migration and asylum agreement. For example, the Spanish government has taken in just under 3,000 people, which is less than 20% of the committed quota.

However, the decrease in migration is not the only result of the European Union’s failed policies. Governments reduced reception and integration policies as far-right political parties spread their influence in Europe.

The Speech of the Intolerant

Why have refugees stopped to apply for asylum? Are countries that were in war still in war? Has the situation improved? Absolutely not.

According to the latest available research of 2018, the number of people forcibly displaced by violence and persecution reached a record-breaking number of 70.8 million.

Even though the refugee crisis mostly affects countries in war, host nations also face the consequences of massive arrivals of refugees that affect the countries’ economic and social policies.

This situation has fostered extreme political ideologies and far-right parties, those who see the arrival of refugees as a threat and advocate for the closing of borders.

These kind of political parties did not have much parliamentary representation since before World War 2 (1939-1945). But this has changed. Nowadays, their Eurosceptic, xenophobic speech has made it into 17 parliaments of the EU.

In Hungary and Poland, fair-right parties are the majority . Italian Vice President and Minister of Internal Affairs, Matteo Salvini, has opposed to the arrival and resettlement of refugees and promoted anti-immigration policies in the country.

During the last elections in Spain, far-right party Vox entered Congress with 24 deputies and 2,677,000 votes. Their leader, Santiago Abascal, was congratulated by several European leaders like Marine Le Pen and Matteo Salvini.

The rise of far-right parties whose exclusive policies are focused on the interests of each country and refuse to cooperate with other governments make it even more difficult to comply with Europe’s asylum policies. 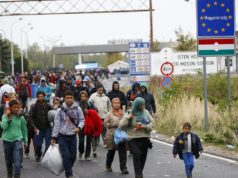 A crisis with no solution in sight