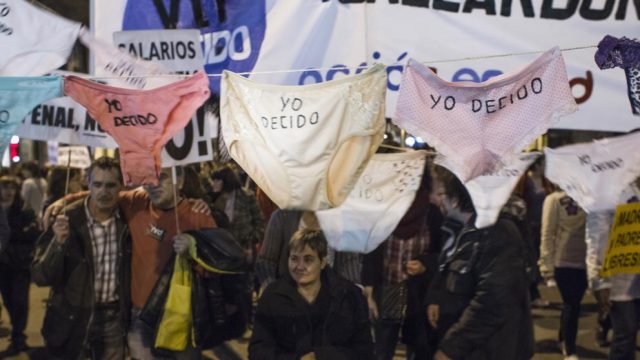 What is it when we talk about feminism, micro-chauvinism, gender and other concepts round International Women’s Day

Temas From its beginnings, March 8 was the Day of Working Women, a date to demand greater working rights for women: decent wages, shorter working hours and safety at the workplace.

Currently, March 8 is International Women’s Day. It is not so much a date to celebrate and congratulate women, but to call attention to gender inequality and to reclaim the feminist struggle.

Hence the motto of this year’s strike: “If we stop, the world stops”. The idea is to make all the work that women do visible and which, is not always recognized or remunerated.

The feminist movement is as ample as there are people in the world. There are many ways to defend women and their rights, but there are a number of ideas that are basic to the understanding of the feminist discourse.

Feminism is a theoretical, political and social movement that claims gender equality.

This movement arises at the end of the 19th century and aims at the emancipation of women: for women to be free to act and decide what they want to do with their lives. Until then and throughout history, women were forced to marry, take care of the household and the family. They had no voting rights and could not work if their father or husband did not allow them.

The feminist movement has evolved and adapted to the demands of the women of each era. That’s why historians talk about three waves of feminism.

The first feminist wave claims the same civil rights as men: the right to receive a higher education, to work and to be treated as equals within marriage (and not as someone who needs authorization or approval from her husband to do something). It is known as the illustrated wave and appears during the 19th century.

The second feminist wave, the so-called liberal wave, struggles to obtain the right to vote, so that women can participate fully in society. The activists of the late nineteenth and early twentieth centuries continue to claim the right to study at university and to work.

The third feminist wave arises from the years 1960-1970 with claims on sexuality, the sex-gender distinction, the eradication of gender violence or patriarchy, a system of social organization in which men hold positions of power.

Chauvinism gathers all those attitudes, behaviors and beliefs that harm, denigrate or oppress women.

Although our societies are more and more equal (equal pay, access to education, political representatives), there are new forms of chauvinism that put equality in question.

The micro-chauvinisms are situations of chauvinism that take place on daily basis. They are attitudes, gestures and words so habitual that are sometimes we do not even realize that they’re happening.

For example, when in a bar or restaurant the check is brought directly to the man , that the toys or girls’ clothes are pink, that what is to be expected of a woman is to be feminine, that expressions like babe or honey are still used.

Sex and gender are key concept to understand feminist thoughts.

Sex refers itself to the biological and reproductive organs of a person. There are 2 types of sex: masculine organs and feminine ones.

On the other hand, gender does not refer to what is biological, but to one’s social identity of a person: the idea of what is considered that of a man and that of woman, along with the traditional roles they are assigned in our society.

A classic example is that of colors (blue for children, pink for girls) or hobbies (sports for children, artistic activities for girls). This is not something that comes by nature, but are ideas that have been built into our society.

The distinction between sex (the biological) and gender (the established, the social and cultural one) has been of vital contribution to feminism, which explains why the oppression towards women is not logical or natural but rather an organized system to keep women under control.

There are different versions of the origins of feminism that try to explain the causes of the oppression on women and the different forms of domination, as well as proposing different lines of action to improve their situation.

Within the feminist movement, the idea of ​​gender mainstreaming incorporates other demands besides gender to explain the inequality there is between men and women.

There are other factors which limit the opportunities and freedom of women such as the color of her skin, her social class, her education and her incapability. For this reason, many intellectuals and thinkers are of the opinion that feminism must also fight against other types of injustices and inequality.