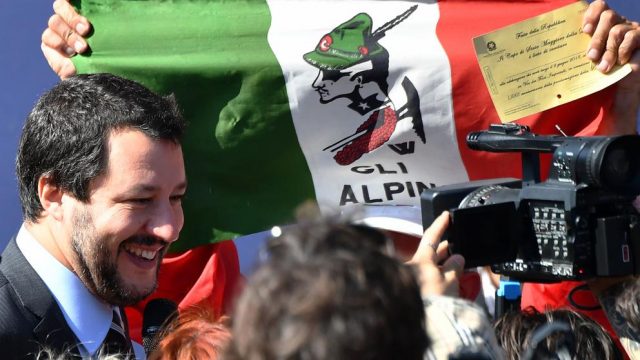 Italy is one of the European countries that hosts the most refugees: located in the middle of the Mediterranean, the south of the country and the island of Sicily are quite close to the coast of Libya, from where thousands of refugees set sail in search of a better life in Europe .

However, after years of welcoming thousands of migrants adrift, the Italian government has taken a turn towards right-wing policies and has decided to close its ports to the arrival of more rescue vessels.

This xenophobic turn is led by Matteo Salvini, current vice president and Minister of the Interior for Italy. Upon learning that the Aquarius ship, with 629 migrants on board, would not disembark in Italy but in Spain, Salvini declared: “Victory! First objective achieved.

Salvini is a deputy of the North League, a right-wing party in northern Italy with a very hard view against immigration.

The Northern League won the elections that took place in March with populist measures that prioritize Italian citizens’ rights before the newcomers, whom they accuse of taking away work and social aids.

Right-wing policies, such as those supported by Salvini, present controversial proposals like the census of the Roma or Gypsy people living in Italy and deporting those who are in an irregular situation.

With his controversial statements, Matteo Salvini has become known outside his country and has gained popularity among populist political parties, which are contrary to the EU and are gaining more power in some countries.

Immigration is one of the favorite topics within these parties and political representatives: they consider that the EU manages it in a deficient manner and that they use it as an excuse to attack migrants.

On the one hand, they are against the free circulation of people in the EU countries. They believe that countries ought to be able to manage their borders as they see fit as well as limit the access of people if they wish so.

On the other hand, they accuse the EU of not defending the external borders properly, that is to say, the borders of the member countries with other countries outside the EU.

Marine Le Pen, the leader of the French National Front, or Heinz-Christian Strache, of the Freedom Party and vice chancellor of Austria, are some of the European politicians who firmly defend this speech.

A door into Europe

Many migrants and refugees enter Europe through Italy because it is the shortest way from the African coast.

The history of the Aquarius rescue boat is just one example among the hundreds of boats that cross the Mediterranean from Libya and head for Italy. Its occupants, mostly from African countries like Sudan, Nigeria and Eritrea, travel all the way to Libya to cross the sea and make it to Europe.

Many Italians believe that the EU mismanages immigration and that is why Italy, because it is a gateway, ends up hosting many more people than other European countries.

That is why they claim that the responsibility for migrants and refugees should be better distributed among countries.