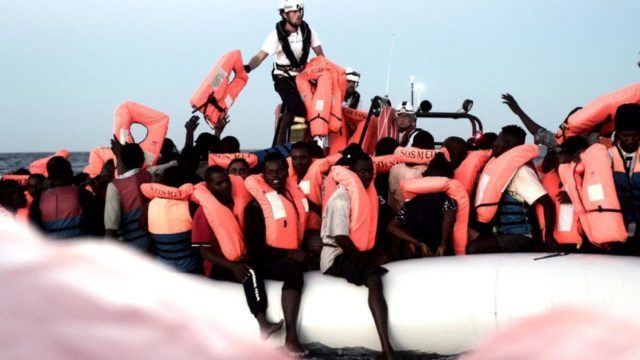 Thousands of migrants risk their lives trying to cross the Mediterranean, while governments stay still

The government of Spain has authorized the Aquarius, a rescue boat operated by Médicins Sans Frontières and SOS Mediterranée, to disembark at the port of Valencia with the 629 migrants traveling on board.

That’s over 600 people who were rescued by NGOs in the middle of the sea. People who have fled violence in their countries and have decided to risk their lives crossing the Mediterranean in search of a better life.

The arrival of Aquarius in Spain is news because, for the first time, a European government has closed its doors to the arrival of these vessels: the new government of Italy, one of the countries that receives the most immigrants, has prevented the Aquarius from disembarking and has refused to welcome more migrants coming in by sea.

The member countries of the European Union (EU) have been discussing migratory policies and hosting quotas for months, while thousands of displaced people flee conflict zones and try to reach Europe.

In the absence of political solutions, NGOs and non-profit associations have taken action to prevent further deaths. The UN data indicate that, between 2014 and 2017, more than 10,000 people died trying to cross the Mediterranean (and those being only the ones reported).

According to the International Organization of Migration, during the first three months of 2018 about 15,000 people have tried to make it the coasts of Europe and 498 have died.

UNHCR, the United Nations Agency for Refugees, has called for governments to get involved in the refugee crisis.

Not only to establish asylum mechanisms and distribute refugees in quotas by countries, but to guarantee human rights. It is their duty and responsibility as political authorities to rescue them and not other organizations’.

The Aquarius case once again puts the story of the Open Arms, one of the rescue boats of the Spanish NGO Proactiva Open Arms, in the spotlight.

This organization is dedicated to sailing the Mediterranean in search of ships of migrants adrift. In less than three years, the three boats of Proactiva Open Arms have rescued 59,247 people in the Mediterranean.

Members of Proactiva Open Arms began their rescue missions when they realized that European governments were doing nothing to prevent migrants from dying when trying to cross the sea. However, now they are the ones accused of breaking the law.

In March 2018, the Open Arms ship arrived at the port of Catania (Italy) with 216 immigrants on board. They had been rescued from the coasts of Libya, where the mafias negotiate with the lives of people and even sell them as slaves. The Libyan coast guard tried to prevent the rescue, but the NGO managed to take the migrants with them.

When arriving at the port of Catania, an Italian judge ordered that the ship were immobilized, accusing the Open Arms crew of encouraging illegal immigration. A month later, the ship was released but the charges against the crew are still ongoing.

Italy is one of the countries that receives most migrants because of its proximity to the African coast and being right in the middle of the Mediterranean. However, the Italian government is adopting ever stricter immigration policies and is collaborating with Libya to prevent migrants from leaving the African coasts.

The NGOs have reported the abuse and mistreatment of the Libyan authorities towards the migrants before the European authorities, but the governments do not intervene because this means they would have to take charge of these people.