At the PyeongChang Olympic Winter Games, athletes will compete in 15 different events, such as skiing, hockey or ice skating.

However, there are other Olympic winter sports that aren’t so well-known in our country, such as curling or bobsleigh, which can increase the adrenaline of anyone watching.

The sleigh may seem like kids’ game, but it is no joke for Olympic athletes who during the tests reach speeds of up to 93,2 mph (150 km/h) on an iron and without brakes.

In the Winter Games there are several sports practiced on sleds, in which athletes glide down at high speeds through a long narrow slide, with curves and sloping walls.

These sports have been made professional and athletes train hard to compete. Due to the high speed and little protection, these are dangerous tests for athletes: if the sled turns or goes out of the curve, they can be seriously injured.

Bobsleigh or bobsled has three modalities: individual, in pairs or teams of four. The sled that is used for this test is a kind of capsule where all the equipment fits in.

When the starting gun is heard, team members must push the sled for 50 meters to catch speed, before entering a jump and starting the descent.

Luge is a test that is done using a much simpler sled, as it were almost an iron. The athlete lies with his back on top of the sled and, when in pairs, the second person lies on the first.

There is a third Olympic test with sled: skeleton or simple sled. Similar as in luge, but the athlete lies face down and with his head in front. It starts with a small race so that the athlete can get a run-up.

A Sport with rocks and brooms

One of the most followed events in the Winter Olympics is curling, not a very well-known sport in Spain, but very popular in Scandinavian countries, Canada or the United Kingdom.

In Curling two teams of two or four face each other. On a long ice track, a target is drawn at one end of it. In turns, teams slide a granite stone over the ice until it reaches the target.

To start, one of the players gives the stone a push. The rest of the team tries to improve the trajectory or increase its speed by “sweeping” the ice with a kind of broom, but without touching the stone.

When a team’s stone hits the target, it can hit other stones that are already in the center, like balls on a pool table.

In total, each team has eight stones: the closer they get to the centre of the target at the end of the game, the more points for the team. 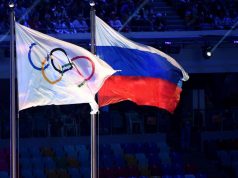 Why is Russia not in the Games?