For fans of The Adventures of Tintin, Belgium and its capital, Brussels, are destinations that can’t be missed.

It’s not just because this is the birthplace of the author, Hergé, but also because the artist was inspired by different emblematic places in Brussels to create the scenes for his stories.

Various streets, buildings and parks in the Belgian capital are reproduced in the Tintin cartoons. And, at the same time, if you walk through the streets of Brussels you will find many tributes to Tintin in the form of murals.

Some of the most famous buildings and monuments represented in the Tintin comics are the Royal Palace and Brussels Park, which appear in the album King Ottokar’s Sceptre.

For the story of The Seven Crystal Balls, Hergé was inspired by La Monnaie theatre and the Metropole Hotel to draw some of the buildings that appeared in his vignettes.

If you look at the details and the architecture of the Brussels North station, you’ll be able to recognise the station that is drawn in Tintin in the Land of the Soviets.

One of the most popular spaces in Brussels is the Place du Jeu de Balle, where an antique market is held every week. That’s where Tintin buys the model of a ship that will begin the adventure of The Secret of the Unicorn.

The street Rue Terre-Neuve in Brussels served as inspiration to create Rue du Labrador, the street where Tintin lived, before moving to the Castle of Moulinsart with Captain Haddock.

The fact that Tintin is one of Belgium’s most famous characters is shown by the number of urban monuments and murals that you can find walking around in Brussels.

A total of twenty facades in the city are painted in full colour with comic characters of monumental size, and of course Tintin is one of them.

The character created by Hergé occupies a special place in the Éditions Le Lombard headquarters, the publishing house that began to edit Hergé’s comics into the form of a book.

You will find an image of Tintin and Snowy on top of the building, located at 53 Rue du Lombard.

Other scenes in Belgium

Outside of Brussels, there are other places in Belgium that are related to Tintin. For example, the Royal Observatory located in Uccle: Hergé used it as a reference for designing the observatory of The Shooting Star.

Another worthwhile stop is the Hergé Museum in the village of Louvain-la-Neuve. There, you can find out all the details about his life and his work as an illustrator.

Finally, you can visit Hergé’s birthplace at 25 Cranz Street in Etterbeek, a suburb of Brussels. 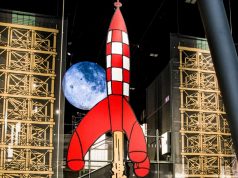 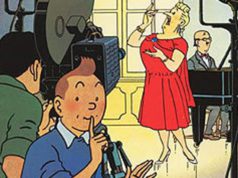 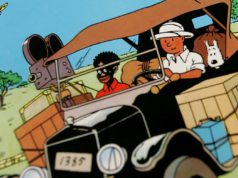