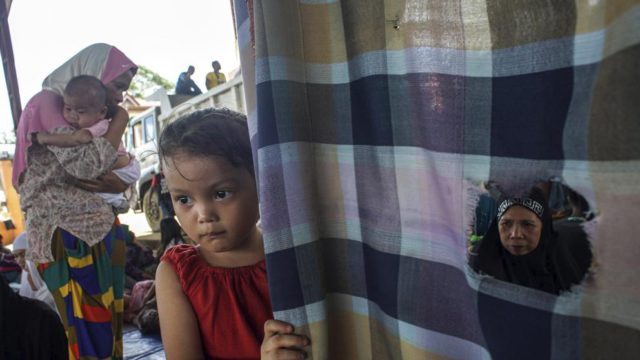 Every day, the war forces thousands of families to leave their homes. But there many other reasons for displacement, apart from armed conflicts: like for example prosecution for their ideas, violence on the streets and even natural disasters can force people to leave their homes.

Sometimes, several factors combine: a bad harvest can make a conflict get even worse. According to UNHCR data, every minute 24 people have to flee in order to save their lives.

The civil war in Syria is the worst armed conflict in the world: in six years, the war has caused more than 2 million deaths and injured and has forced more than 5 million people to leave their homes, almost half of its population.

There is a long list of armed confrontations that affect the population of countries and regions of the Middle East: Iraq, Afghanistan, Libya, Yemen, the West Bank, Gaza …

In Africa, riots happen in a dozen countries and has originated 20 million refugees throughout the continent. Meanwhile, in Europe, armed groups clash in eastern and southern Ukraine and have brought about a wave of internally displaced people.

There is a less visible but equally deadly type of violence: that of street gangs, mafias that threaten the population and are willing to kill to get what they want.

This problem is one that affects children and youngsters in Honduras, El Salvador and Guatemala. They are forced to leave their homes (sometimes even their families) to live safely and secure at least a future for themselves.

Prosecuted for being or thinking different

Following the definition given by the Convention relating to the Status of Refugees, a refugee is a person who has had to flee his country because he is the victim of prosecution for his race, religion, nationality or political views.

In some countries, those who have different views than to those promoted by their governments can be prosecuted, tried and even imprisoned. Many decide to flee so as to get away from this prosecution: they are called political refugees.

Some members of the LGBT collective (lesbians, gays, bisexual and transgender) are also discriminated because of their sexual identity and suffer persecution and even aggression in some countries.

Climate change also affects this crisis of displaced people that we are living.

Natural disaster cannot be predicted, but global warming affects climate patterns and can cause typhoons and floods to be more frequent, or periods of drought to be longer and more severe.

People living in these areas must leave to survive. In fact, it is already happening in some places of the Pacific Ocean such as the Marshall Islands or Kiribati.