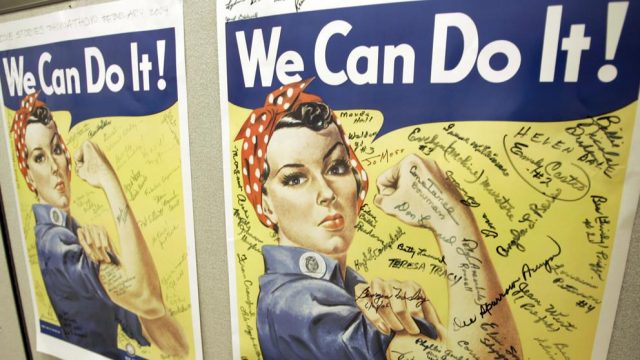 Throughout history the woman has always been given a traditional role in the home: do housework, cook and clean, look after the children, have the dinner ready when their husband comes home from work….

The fight for equality in the working world, was one of the reason that originated in Women´s Day.

At the beginning of the XIX century, the International Conference for Socialist Women demanded the right to vote for women, meanwhile the working women factory workers in the United States went for strike to achieve working improvements.

We can do it

Half way through the last century, more and more women worked in factories, above all because of war conflicts. During the First and the Second World War, men went to war on the battlefield and women substituted them in the factories so as not to lose production.

The famous poster “We can do it” was created in the United States during the Second World War (1939-1945) in order to lift the population´s spirit.

Women played a fundamental role in keeping the country running: they took the men´s places in the factories and prevented the economy from crumbling.

The poster shows a woman in overalls, lifting her arm as a symbol of power and strength of working women. In the decade of 1980, this poster became a symbol of the feminist movement.

The glass ceiling at work

Within the feminist movement, “the glass ceiling” is a metaphor to explain the situation of women´s inequality in different fields.

This expression is used because it is the invisible barriers, which apparently do not exist or no one wants to admit, but which end up harming women in their professional career and in their personal life.

In the working world, women earn less than their male colleagues despite occupying the same job and having the same responsibility. Furthermore, according to United Nations Data, less than a third of Management positions, are occupied by women.

The situation of inequality gets worse in those countries with fewer resources, where women have limited access to education.

Apart from having fewer opportunities, it is also more difficult for women to combine their profession with motherhood.

In all the world only 63 countries offer the 14 weeks of maternity leave recommended by the International Organization for Work. And less than a third of working women have the right to ask for this leave.

This computer graphics of UN Women offers a globalized vision of the woman in the working world: the salary gap, the gender inequality in occupation, the legal barriers and the social protection that they receive.

Fortunately, the governments in some countries are developing new laws and measurements to promote gender equality.

Iceland is the country with the least gender inequality and has just passed the Pay Equity Act: companies are obliged to pay the same salary to men and women (if they break this law, they must pay a fine of up to 400€ per day).

Sweden is a referent country in the gender equality. 46% of their parliamentary representatives are women, the leader of the Swedish Church is a woman (Antje Jackelén, archbishop of Upsala) and the maternity leave lasts up to 480 days, which fathers and mothers can distribute as they wish.

On the other hand, the Prime Minister for New Zealand, Jacinda Ardern, has announced recently that she is expecting a baby and will be on leave for six weeks. Another example to demonstrate that women must not renounce their professional careers if they want to be mothers. One step further towards equality.