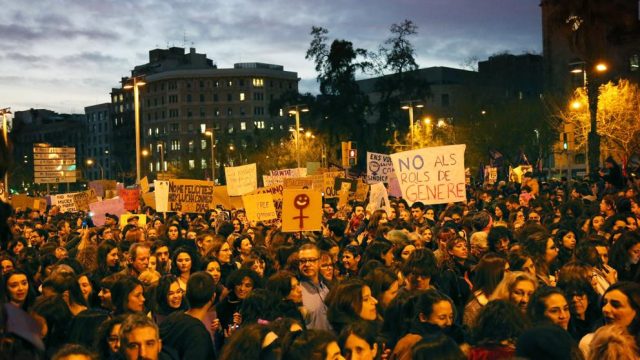 Women continue to be in a situation of inequality in areas such as politics, education or work

Women represent half of the world’s population. More than 3,600 million girls, women, and elderly women who live in very different conditions depending on the country, city or area in which they are located.

However, gender inequality is a problem that affects women worldwide in different ways and in different areas of our day to day life: at home, at school, at work, on the street …

On March 8, International Women’s Day is celebrated to show today’s situation of women, break stereotypes, raise awareness on inequalities and promote change towards a fairer and more equal society.

If we put together the parliaments, congresses and legislative chambers of all countries, only 1 in every 5 representatives would be a woman.

The lack of women in government is an obstacle when approving equal laws. For example, to fight for equal pay, lengthen the maternity leave, protect victims of gender violence, etc.

The wage inequality between men and women is 23% (world average): this means that, on average, women earn just 77% of what men earn.

In the working world, women earn less in spite of holding the same position and having the same responsibility as men. In addition, less than a third of management positions are taken by women, according to UN data.

The poorer, the more unequal

UN data shows that gender inequality is widespread throughout all continents. However, in less developed regions, girls and women are more vulnerable.

In view of the lack of resources, families prioritize the education of their sons and keep daughters at home to look after the family and household. There are more than 120 million children and adolescents in the world who do not go to school: more than half are girls.

In addition, it is estimated that there are some 875 million illiterate adults, two thirds of whom are women. The lack of education limits a great deal the chances of a better future.

If girls, young women and women had the same opportunities as men, the world economy would grow and the situation of equality would reduce social conflict.

Investing in the future of girls and women is the best bet to transform the world we live in.

Women are not the weaker sex

Throughout history, women have been subjected to the will of men for cultural, religious reasons or even by law. This began to change at the beginning of the 20th century, with the first demonstrations and strikes of working women.

Currently, international laws recognize women as equal: both women and men have the same rights, but in practice these are not always fulfilled. Often, women suffer abuses, discrimination and violation of their rights just because they are women.

Problems such as gender violence, child marriage or sexual abuse occur because worldwide the woman is still believed to be weaker nor deserve the same respect as a man.

And this does not only happen in poorer countries. The recent Hollywood sex abuse scandal and the #MeToo campaign proves that it is not an economic issue.

It is, above all, a cultural, educational and historical issue. We must fight against stereotypes; change the vision that part of the population (both men and women) has towards women and their role in society.

Until the day comes in which we’ll no longer need to fight for women’s rights.